Eng. Helmy Abou ElEish, Chairman of the Board of Trustees of the University of Heliopolis for Sustainable Development and Dr. Yousry Hashem , President of the University,inaugurated the graduation projects of the students of the Faculty of Engineering at the University,where they implemented and innovated technological projects in the field of mechatronics. Dr. Yousry Hashem, President of the University, praised the student projects that were designed and implemented by the students of the final year in the departments of the college, stressing that they are distinguished by their quality , quintessence and their attempt to cure industrial and life problems in innovative and low cost ways. Dr.Rasha Al-Kholy , Dean of the College, confirmed that the graduation projects for this year were characterized by innovative ideas and distinguished in all scientific and applied aspects. It is expected that the Academy of Scientific Research and Technology will adopt one of these projects as part of the technological incubators project to establish emerging technology companies and successful entrepreneurs who have a core at the beginning of their career . 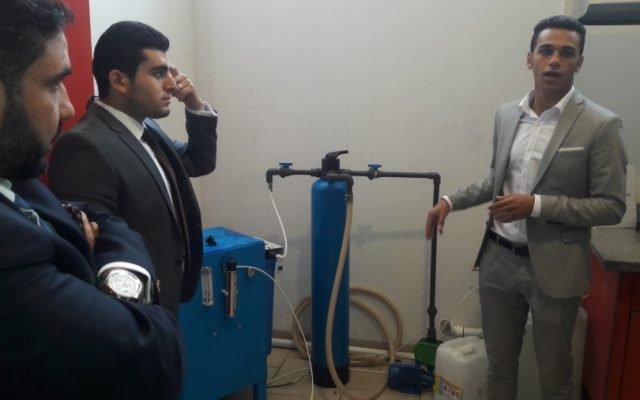 Al Khouli pointed out that she is pleased to present students with a summary of what they have learned in practice in their graduation projects, but what should be mentioned is that these projects are the beginning of the road for research, development and production in the continuous graduate process.She added that the student projects in the Department of Mechatronics has included the project of printing three-dimensional forms, which can print and produce 3D stereoscopic shapes, through a certain material produced by the body is similar to plastic, where each dimension coordinates a certain mator is responsible for movement in this dimension of the coordinate, And therefore we can produce furniture or anything stereotyped, and the cost of this project does not exceed two thousand pounds only.She continued: “Among the projects, the project of producing a plane with 4 blades, we take its functions through an electronic circuit, and each feather is placed on a high-speed metor, and the aircraft is controlled through remote control, and uses this aircraft in the difficult tasks, The aircraft can detect bombs and explosives, locate explosives, use the aircraft in agriculture, and explore mobile signals, which can help in many difficult tasks. ” She explained that for the Water Department, which is the first department in Egypt in this way, it holds graduates who combine civil engineering and chemical engineering with water. The students of this department produced a traditional water plant design project, as well as the design and implementation of a desalination plant  which Egypt needs during this period due to all the urgent trends to rationalize the use of water.