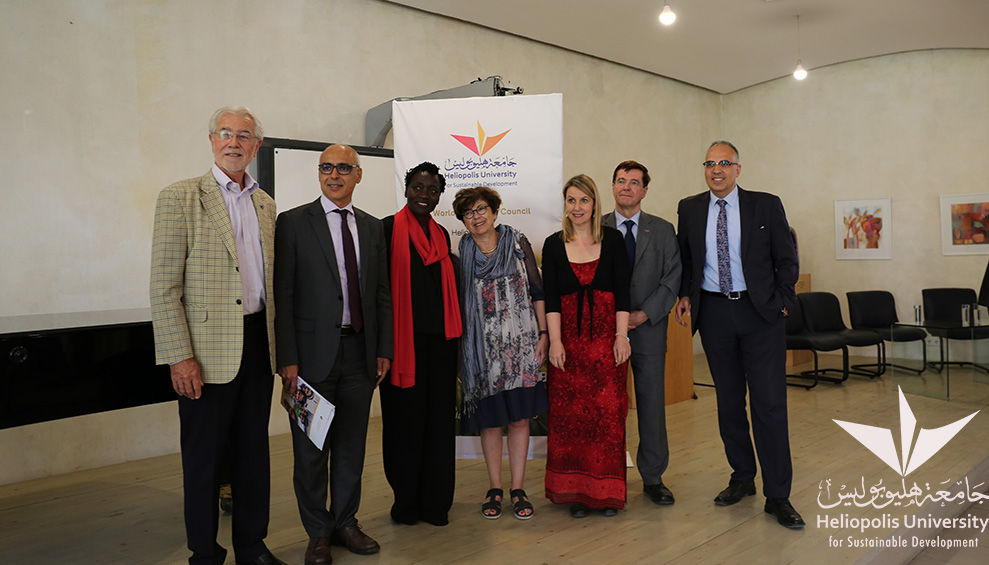 In cooperation with the World Future Council (WFC), Heliopolis University for Sustainable Development hosted a high-level conference under the title: “Solutions for Land, Soil and Food in Africa”. On April 24, the event took place at the university campus in Cairo and received a huge media attention. International experts and high-profile guests, among them Dr. Auma Obama, Director of the Sauti Kuu Foundation, Monique Barbut, Executive Secretary of the United Nations Convention to Combat Desertification and the Egyptian Minister for Water management, Dr. Mohamed Abdel Aty came together and worked on a declaration about the sustainable development of lands, soils, and food production in Africa.

The declaration calls for concerted actions that should be built on synergies between international and national policies, aligned with the global agenda 2030 and its 17 Sustainable Development Goals (SDGs) – precisely, to help achieving goal number 15 “Life on Land”. The declaration also includes creating a supporting environment that fosters sustainable entrepreneurship, education models addressing current and future challenges, as well as empowering the civil societies and research bodies.

“We should humble ourselves and go back to the soil.” Dr. Auma Obama, World Future Councilor and Founder and Director of the Sauti Kuu Foundation

By a warm welcoming speech, the University Chair of the Board of Trustees and SEKEM’s CEO Helmy Abouleish inaugurated the event. He emphasized that agriculture is part of the challenge, as well as the solution. “Not only large organizations, but also each one of us is a part of the solution,” said Abouleish, the recently chosen UN-Champion for facing climate change.  “We will sign a declaration that calls for adopting global sustainability policies at all levels, covering the social, cultural, economic and ecological dimensions of sustainable development.”

In this context, Helmy Abouleish welcomed the first conference speaker, Dr. Auma Obama, World Future Councilor and Founder and Director of the Sauti Kuu Foundation. “According to latest reports, the healthiest people are living in the poorest countries of Africa, because they directly eat from the soil,” Dr. Obama stated. “We should not be arrogant but humble ourselves and go back to the soil. The more we have, the more we destruct ourselves.” In her inspiring speech, Dr. Auma Obama also asserted on the urge to “work collectively for creating a safe world for our children and grandchildren.”

Among the conference speakers was also Monique Barbut, Executive Secretary of the United Nations Convention to Combat Desertification (UNCCD). In her speech, she referred to the burning issue in Africa, stating that if the land continues to be degraded, the climate keeps changing, and the population continues growing, 65 million African people will be forced to immigrate to North Africa and Europe during the coming 15 years. “Although the picture is gloomy, we still can make it a bright one,” she asserted. Barbut also highlighted the initiative “3 S” launched by the UNCCD and implies to “Sustainability, Stability, Security”, as key solutions for the current socio-economic issues in Africa. 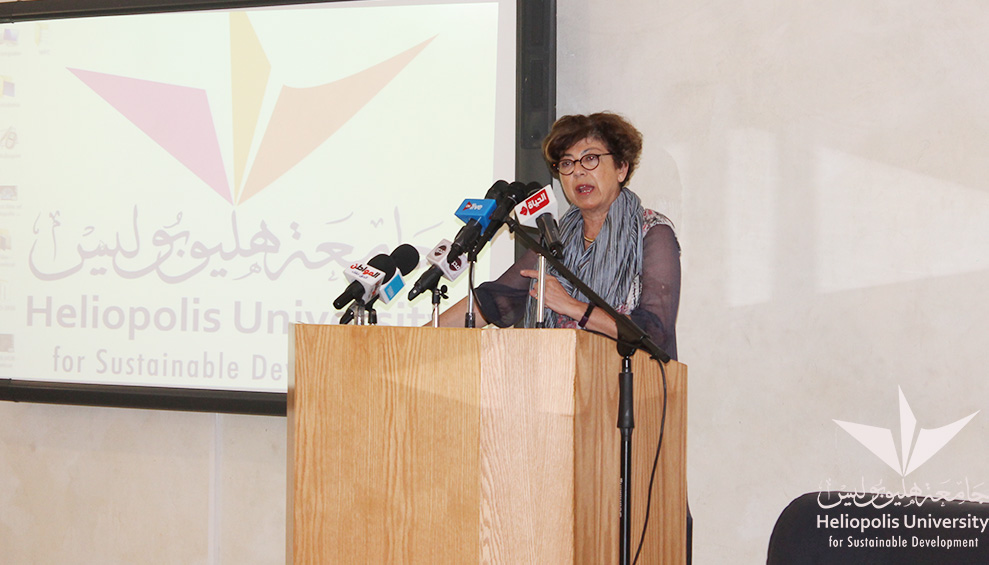 At the national level, the conference was also attended by Dr. Mohamed Abdel Aty, the Egyptian Minister of Water Resources and Irrigation and Vice President of the African Ministers’ Council on Water (AMCOW). The Minister emphasized on the Egyptian vision 2050 that is currently developed in the sector of water resources management, based on four pillars: water quality improvement, water use efficiency, water resources development and creating a supporting environment in this regard.

“Agriculture is part of the challenge but in the same time the solution.” Helmy Abouleish

Entitled “The Miracle of Merere”, a documentary was introduced to the conference by Alexandra Wandel, Director of the World Future Council Foundation which also convened the Future Policy Award 2017 for combating desertification. The documentary shows the vast landscape and livestock of Merere, an Ethiopian village – a small miracle created by the  local community in cooperation with their government and donor funded programs. 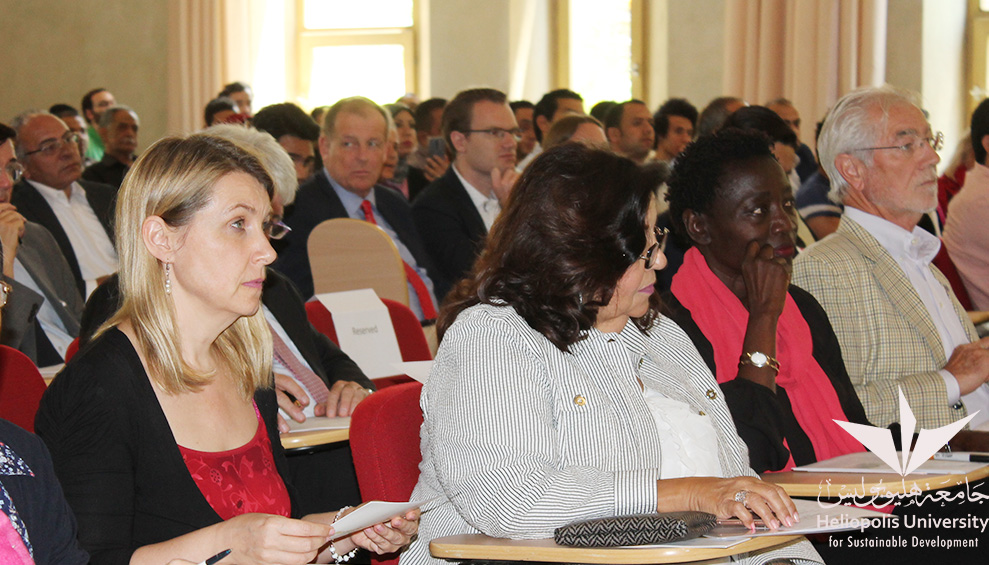 The World Future Council is a charitable organization which researches, identifies and spreads policy solutions that contribute to sustainable development. SEKEM Founder Dr. Ibrahim Abouleish had been a co-founder and one of the WFC councilors. His son, Helmy Abouleish has been elected as World Future Councilor in November 2017.

“We have worked for years with SEKEM and HU on promoting sustainable agriculture and water resource management in Egypt,” Sebastian Lesch, Head of German Development Cooperation at the German Embassy

Furthermore, a huge recognition for SEKEM and Heliopolis University was expressed during the official event by Sebastian Lesch, Head of German Development Cooperation at the German Embassy in Cairo: “We have a long relationship and worked a lot together on promoting sustainable agriculture in Egypt.” He also pointed out how the Egyptian youth has the best potential for the future and should be empowered by innovative education programs which will bring huge benefits to the country.

International experts together for a change

The international conference ended up after conducting an open discussion between the audience and three experts: Abdelkarim Sma, form the International Fund for Agricultural Development (IFAD),  Hans Herren, President of Millennium Institute and Recipient of the Right Livelihood Award and Lothar Fickert, Professor Emeritus at Graz University of Technology. The discussion was moderated by Dr. Hani Sweilam, member of Heliopolis University Board of Trustees and Director of the Hydrology Department at RWTH Aachen University, Germany. The talk mainly addressed the problems facing agriculture in Africa, and how to integrate the principles of Education for Sustainable Development (ESD) into national education systems.

As Land for Life award winner, SEKEM believes that combating desertification and land degradation is a key element for achieving the SDGs when they are considered holistically and the young generations are integrated through curricula based on the principles of sustainable development. Heliopolis University, SEKEM’s educational entity, is based on the concept of Sustainable Development and it is one of the parties that signed the declaration led by the WFC. Such collaboration will hugely contribute to empowering the current generations via strategic plans and help tackle future challenges in an early stage.