Heliopolis University students participate in the “Hult Prize”; an International Competition for $1Million Prize, for the second year in a row, in the context of motivating students and increasing their awareness of social entrepreneurship and its importance for a better future.

The Hult Contest is an annual global competition to win a prize of 1 million U.S. dollars. The competition is held in cooperation with the United Nations in order to present one of the problems the world faces every year and aims to solve it through a startup. 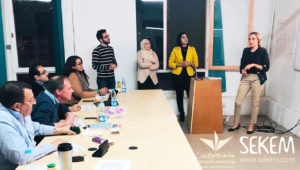 The competition begins at the university level, and the winning team then qualifies for one of the regional finals that will be held in multiple countries around the world. The winning team then moves to the international competition that will be held this year in Boston, where the teams will receive extensive training by businessmen and entrepreneurs. The last stage is held each year in the United States of America under the auspices of former President Bill Clinton who announces the winner.

Heliopolis University held the competition at the Entrepreneurship Center, where 63 university students participated. Workshops have taken place to increase students’ awareness of the concept of social entrepreneurship and to explain the idea and stages of the competition in a climate conducive to creativity while implementing some recreational activities that support teamwork and thinking outside the box and solving problems.

Represented by 16 teams of creators and change-makers, the participants were prepared for the competition through various exercises designed to help develop their ideas and turn them into successful projects.

The competition was held in HU on Sunday, December 22nd in two phases, and the winning team “Olive Power” was chosen, whose project idea is to produce charcoal substitute that is environmentally friendly from an extract olive residue, where some of its advantages are the lack of combustion odor like conventional coal, also the ease to ignite. Its burning time lasts between 6 to 7 hours and is considered environmentally friendly as it produces carbon dioxide up to 60% less compared to conventional coal in addition to the recycling of materials.

The team was qualified to compete in one of the regional finals with the opportunity to reach the international finals to win one million U.S. dollars to turn the idea into a live project.